Mermaid of the Magdalene 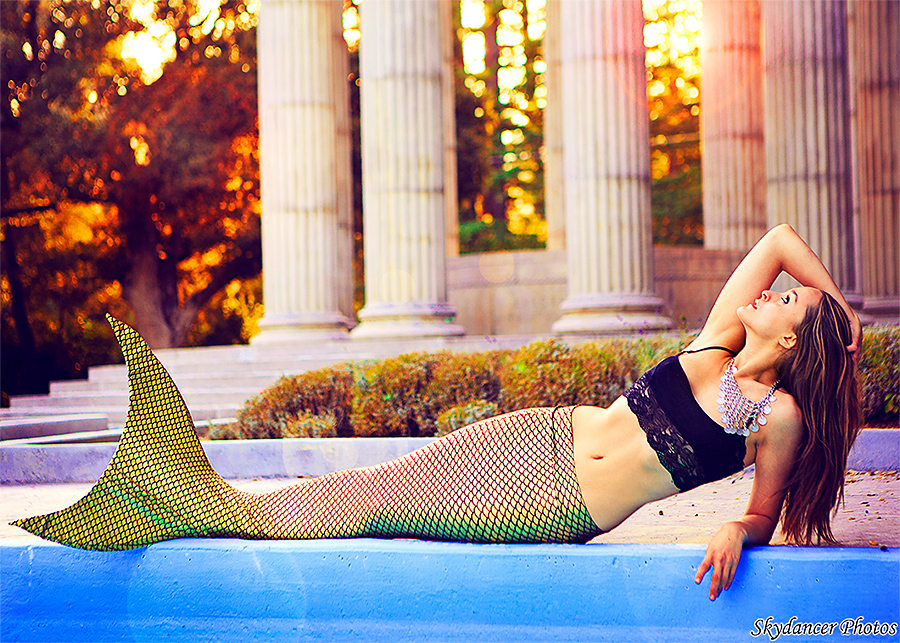 I never resonated with the classic starfish in the hair, Barbie style mermaid, nor the dark fanged, lure sailors to their death version. There was something more mystical and sacred regarding my desire to live under the sea. That the mermaid essence I’m most aligned with in my heart of hearts is a vital part of my own feminine essence expressing itself on the planet at this time in human form.

Our essence (higher self, soul, ext) is always moving through our lives, pointing us toward things that feel aligned with who we are. And we are more than just Human. Our consciousness is currently experiencing itself by identifying with a body, but our consciousness is so much more. I know mermaids, faeries, dragons, phoenixes, elves, and all manner of combination of these things. Some people just don’t seem as human as something else.

In my own personal mythology, I’ve always resonated deeply with the water. I’ve been told by many different intuitives that an aspect of my consciousness experienced itself as water in the beginning of this planet, that I’m a water naga (dragon), mermaid, and that I’ve lived under the sea. Honestly, I feel more at home under the water. If I could, I would move into a crystalline home on the sea floor and have dolphins and exotic fish as my neighbors.

Back before I looked at my life as a myth, I would still enter into ecstatic states of consciousness through the water. I remember during the darkest times in my life, around age 15, when I went to the Caribbean and had an experience of complete soul embodiment standing in and staring at the sunlight dancing upon the turquoise waters. It was the most exquisite feeling of peace and precious perfection. Despite what was going on in my life, my essence still managed to shine through all the turmoil I was experiencing and the water acted as a trigger for remembrance. My relationship with the water has blossomed in that I no longer look at it as just a substance, but I see her as the elemental embodiment of the divine feminine.

The water represents deep feminine wisdom, the principals of love, surrender, flow, shape shifting, purification, and trust. She is a being of profound Grace, of artful alchemy. When do I feel most aligned with these things? What gets me feeling all wet and oceanic? Mystical union with God.

My relationship with God (source, creator, ext) has always had a certain texture. A romantic, mystical Rumi quality, a special aliveness felt purest alone, either in my own sacred space or out in nature. This feeling stimulated not by modern belief systems, or current experiences common in this age, but the deeper connection with the fabric of life itself. The wisdom of Love. Not a little love, but the big holy shit this energy is what created the whole universe kind of Love. I’ve come to realize that all of true life is an act of love making. The merging of the father (sun, light, electricity, fire, ext) and the mother (earth, matter, magnetism, water, ext).

As a little girl, I named everything Rose Marie. As I grew older, I realized that the lineage I feel most aligned with on this planet is the Rose line of the Christ/Magdalen energies (rooting in the Isis temples of ancient Egypt). After high school, I started walking the path of the Beloved more consciously.

So how do Mermaids and the path of the Rose/Magdalen/Isis lineage relate? They both represent the return of the Divine Feminine, specifically the archetype of the Mother. It is an immersion into Love, Grace, and Surrender.

Recently, I read a book called Mary Magdalene: The Illuminator. While I don’t resonate with everything, a few pages were absolutely priceless. It revealed to me the connection between my love of the essence of the Magdalen energy and mermaids, right down to the etymology.

To begin, it’s helpful to note that Mary was a title used for priestesses of woman who considered themselves brides of God, specifically David kings. This makes sense when you consider the virgin Mary and Mary Magdalen. They were both priestesses of Isis.

In Egyptian, the word is derived from Mry “beloved” or Mr “love”. Mer, Merry, Marry, Mary, Marie, Miriam, Meru (indian for yoni, navel, womb, center) are all closely related. Mar in many languages also means Sea. Mary Magdelan was considered a fish goddess. This makes complete sense because the water is the elemental essence of the divine feminine. The Mer aspect of Mermaid means beloved, love, or sea, so what does maid mean? On the surface, maid means servant or in service to. However, another meaning is a virgin. By virgin I do NOT mean not having had sex. A virgin is an energetic state that feels pristine, innocent, and pure, which are all elements that can be and hopefully are felt when making love.

So what is in the name Mermaid?

We are in the time of the mermaids, the Age of Aquarius and the return of the Divine Feminine. Mermaids represent what we need to return to if we hope to evolve as a species instead of go extinct. They symbolize immersion in the elements, connection with the cosmic womb, deep alignment with the Divine Mother, beauty, grace, love. The same thing that the energies of the Magdalen represent to me.

I am in service to the Sea, to the Divine Feminine, to Love. This is what it means to be a Mermaid of the Magdalen. I dedicate my life to living in alignment with the truths that the water whispers sweetly to my soul.